As we are approaching the end of our beloved project, the pilot actions developed by the beneficiaries are adding up.

At this point, all the new projects sparked from the training programme are out there experimenting new types of cultural and artistic interventions.

We have already presented the hybrid interventions VIDEOBOX and KONSTHALL: TEATER, all the 4 Basque projects, Field B’s Serbian pilot AIO and the Italian PLAYLIST, PLAY ON! OPERAZIONE SIPARIO, WALKABOUT and PASSEGGIATE SONORE, and Field A’s publication Cultural Centre for Dummies.

Now, let’s see what the Italian Field A – new management models for cultural spaces has more to offer.
The most recent projects have mainly focused on two lines of implementation: audience development and cultural regeneration of spaces, two thematics that are currently very hot in the European cultural and artistic market.

As economic, social and environmental sustainability become more and more relevant topics in nowadays society, the urge to experiment with new ways of improving the competitiveness of the performing arts field has steadily grown. In fact, as well as reaching new audiences makes an artistic or cultural piece last longer, using old buildings for innovative cultural purposes means cutting down costs and revaluing the local cultural heritage. 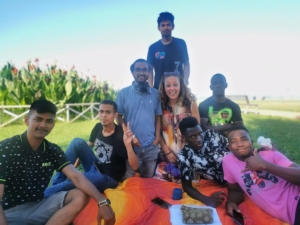 If the Covid pandemic has given a boost to the exploration of the digital universe on one hand, on the other the need for communities to meet in presence has lately become more evident. And Marche, known as the 100-theaters Region, has plenty of cultural and social spaces to host them.

But where is the community of spectators? Which types of audience hang out in the cultural spaces operated by AMAT?
The Melting Pot theater school project arises from these questions. By listening to the territory and the associations that animate it, AMAT could investigate whether a cultural management model that keeps the community on the spotlight was possible, starting from its most fragile components. The objectives of the pilot action are: 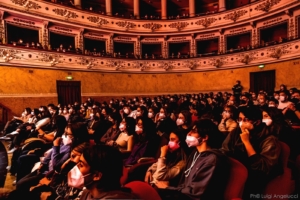 Music is the protagonist of this format: it involves an actor, a singer and some musicians (cello and piano). A new “crime story”, inspired by Macbeth, in which the students, leaving some objects related to the story of the opera, have to redial the plot and understand the most important topics of the drama (the choice, the ambition, the rising and the fall in life, etc.).

It is not simply a way to help students discover and understand the opera, but also a social action to make them understand the social role of the theater in human life. As a pilot action, the foundation produced this new hybrid performance by selecting the artists and organizing meetings to have a stage production able to be performed in schools and non-theatrical spaces. 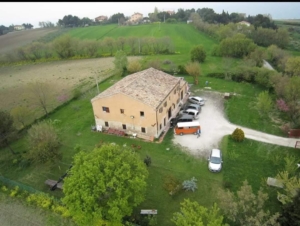 In 2021, Asini Bardasci – a theater company now operating in Montemarciano – and other associations, already members of La Casa della Grancetta, started cooperating with the local administrations and proposed a reopening of the facility, with the aim of setting it as their headquarters.

For this reason, the pilot action Grancetta 2.0 is aiming at regenerating the building, especially its open spaces, in order to host and promote public events.

The project Grancetta 2.0 focuses on stimulating the participation of both Senigallia’s local community and tourists by offering a series of activities connected to artistic performances and creating several opportunities for entertainment.

Besides what already described, the innovative element of the project is to be found in the communication activities. The Storytelling, being the art of ”telling stories” used as a strategic marketing tool, will offer a peek into La Casa della Grancetta’s history and a glance into its future, to outline a path of do’s and dont’s about redeveloping public spaces for present and future generations. 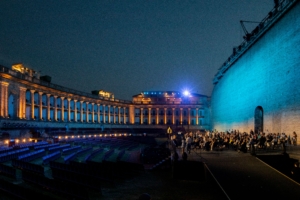 Associazione Arena Sferisterio has been running for many years as an open-air arena in Macerata, representing both a theatrical space and a historical city monument.Every summer, the Arena hosts the Macerata Opera Festival, an internationally known festival hosting opera and pop concerts among many other events.

In order to always find new ways to keep the location running throughout the year, the association often reinvents its spaces to give a twist to its offer. A few years ago, the foyers were repurposed into a museum area that could be used as a multifunctional space, able to host events, rehearsals and tourist activities. Moreover, a new format was developed, named Palco reverse, where the audience was moved from the seats to the stage, thus contributing to changing their perspective of attending a show.

Following this regenarational path, Arena Sferisterio’s pilot action is to transform warehouses into a new space, designed in collaboration with the Macerata Municipality. The new lightning project applied in the restored buildings allows the place to host music exhibitions and events and to widen the Macerata Opera Festival programming, thus experiencing the Sferisterio out of the main stage. 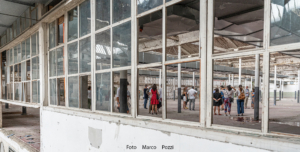 The TrainArt Project has offered Fondazione Pergolesi Spontini the opportunity to develop its potential. The company needs more sustainability and greater balance between public and private resources, revenues from ticketing and from commercial and instrumental activities.

One of Pergolesi-Spontini’s strengths is the scenography-workshop, it is something that makes the company stand out from other competitors. If the company wants to properly expand, it requires larger spaces to organize its work, it needs to expand the range of its technical creations, create larger projects and build larger installations in order to attract more clients.

After a long research, the right place was found: one of the most important archeological facilities located in Jesi: the former Cascamificio (18 thousand square meters).

The facility has been an excellent investment and from 2022 to 2026 the building’s recovery and redevelopment project will be financed by the National Quality of Living Program (PinQua).

Within the framework of the TrainArt project, the long-term goal of the FPS’s pilot action is to organize workshops and to encourage the local community to take part in its proposed cultural activities.

What’s coming next? Subscribe to our newsletter to receive the very last updates on the project in September.