Something we have witnessed in the past decades is the tendency of live performances to draw away from the notion of a prepackaged value to be delivered to the audience in favour of a direct involvement of the audience itself in the construction of this value. This tendency naturally implies a radical change in the content as well as in the structure of live performances at large.

By taking into consideration the events planned for the celebration of the European Capitals of Culture 2020 and 2019 in Galway and Matera respectively, it is possible to verify that many performing arts events have been designed so as to be fully ingrained and bring change in the texture and space of society.

For the 2020 celebrations, Galway Community Circus has ideated a project – Wires Crossed– which heavily relies on the participation of the community, as it wants to trigger a reflection about a dramatic issue of the Irish society (and not only) but also wants to signify a positive fightback. Wires Crossed involved nine youth and social circus schools around Europe, its purpose was to train around 400 people in the art of funambulism over a period of four years and have them reunited in Galway in summer 2020 to cross the River Corrib and the Claddah Basin together. The choice of the mode and location of this event has a specific significance connected with the cultural history of the city: it wants to commemorate the many lives that have been lost in the river through suicide in the past years, but it also wants to celebrate self-empowerment and wellbeing through inviting people to defy their physical and mental limits and support each other in an unprecedented, common endeavour. What could be understood as a mere acrobatic spectacle has in fact multiple layers of significance: the participatory nature of the event, together with the symbolic import of the chosen site, have turned a tight-wire walking workshop into an act of social activism that looks to uphold the positive effects of movement and physical achievements on mental health and, more than this, into a long-term project for social cohesion. 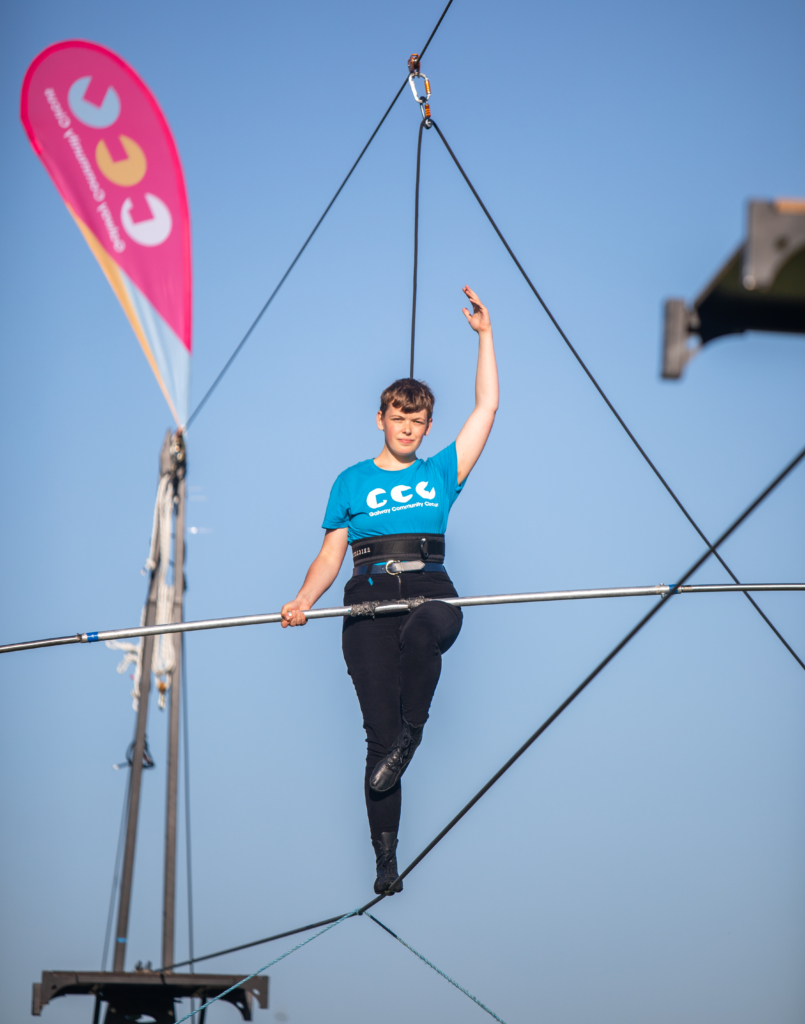 On the other hand, the Open Playful Space project – realized by the Uisp Basilicata in collaboration with ISCA, Teatro Potlach, ADD Umbria Academy, Muvt ASD, Momart Gallery, Lacaposciuc ASD, TeatroPAT, Associazione Giallo Sassi, Associazione Joven, Basilicata Board e ASD Sk8ong Team – in occasion of Matera- European Capital of Culture 2019, is an example of how performing arts can contribute to the regeneration process of urban spaces. Open Playful Space required different artists to go explore the meanders of Matera and design street art workshops and performances that would make those areas culturally attractive and could transform them into gathering places, with particular care for the younger population.

The project exploited the playful and interactive nature of street arts to draw attention to the most neglected areas of the city and focused on the implementation of movement, sport and theatre as means to encourage innovative modes of use for those areas. The community again was at the heart of the project: workshops and activities (capoeira, juggling, parkour, art du déplacement, theatre) were planned in order to initiate the participants into a reinterpretation process of the “invisible” spaces of their everyday life, dismissing those mental restrictions that want to classify things in virtue of their officially allotted function.

The notion of public space holds necessarily sociological implications and therefore, all the arts that look to play with this notion are bound to take on a sociological, if not political, value. In our reflection about how performing arts have moved out of theaters and traditional venues to embrace the city as an organic, living stage and come closer to the needs of the community at large, it is necessary to mention a quite new phenomenon that consolidated in the city of Milan[1] a few years ago and recently got a foothold in many other Italian cities: the “festival diffuso” (widespread festival). The core principle of a “festival diffuso” is that it is not only preoccupied with the cultural offer itself, but wants to make sure that this offer is in compliance with the cultural, political, economic characteristics of the territory where the events are based. The “festival diffuso” is an example of a bottom up, decentralized and sustainable organizational model which relies on the cooperation of peer institutions, each one endowed with a conspicuous degree of autonomy in the planning of the event they host. The decentralized organization is evident in the fact that the events are not confined within a geographical and symbolic centre, but are widespread along the outskirts of the city so as to create a net of cultural centers, in an atmosphere of social inclusivity. But what is essential to highlight about this type of festival is that, while it looks to increase the accessibility of the cultural offer to a most diversified audience, it also creates economic opportunities for those private bodies that want to renew their business model and are so willing to invest in the cultural sector. The “festival diffuso”, as organizational model, is thus also a manifestation of the unexpectedly constructive and profitable symbiosis between art and business, one capable of inspiring innovation and creativity in a bilateral direction.

In compliance with this logic of bilateral contamination, B.ART (Business&Art per la fertilizzazione d’impresa nelle Marche), active since 2018 and coordinated by Consorzio Marche Spettacolo, is a project thought up to create a communication channel between performing arts professionals and local businesses: members of the consortium are invited to propose creative projects that will respond to the needs of the companies in the fields of training, marketing, communication and team building. Here again, performing arts find a new function through the relation with the economic texture of the territory. What do coffee and opera have in common? This is the question that Nuova Simonelli (a company that produces coffee machines) and Macerata Opera Festival tried to answer in their collaborative project Opera Hip(ster). Their intention was to attempt a new interpretation of opera music through a contemporary perspective, so to give form to an hybrid language that would reflect the company’s values: its attachment to tradition as well as its tension towards innovation. During the Expo 2015[2] in Milan, the outcome of this collaboration was presented to the public in the form of a live event: with the help of a sophisticated set of microphones and amplifiers, coffee grains and coffee machines were turned into music instruments and their sounds captured to give life to an exclusive performance. The event not only served to showcase the company’s products but, most importantly, it succeeded in making sure that those products would be associated with a specific mood and lifestyle.

On the other hand, E.N.J.O.Y (Empathy to Narrate a Job: an Occassion for You!), is a project with a completely different focus. The Italian theatre company Rovine Circolari designed a series of creative workshops directed at the staff of the IFI company with the aim to increase the quality of their interpersonal relations and their sense of belonging to the brand. These workshops eventually lead to a theatre performance which was presented as a further moment of sharing for the co-workers, but also played a part in the company’s marketing strategy as it helped develop a more definite brand profile.

The tight connection between the social impact of performing arts and their necessity to happen in the space of the community brings us to a further reflection about the recent phenomenon of the digitalization of live events. In the past months we have witnessed the response of the arts world to extraordinary circumstances, but maybe what we have seen is just a foretaste of what the future of performing arts will look like. If art should offer a portrait of our social reality, isn’t it consequential that it should also confront with the communication modes that mould our social interactions?

It is hard to delineate the boundary between the limitedness and the unlimitedness of the digital medium, as it offers numberless possibilities in terms of creativity and accessibility, but also infects the “uniqueness” of an event that is meant to be embedded in a certain time and space frame, fragile, ephemeral, irripetibile. The only way to retrieve a degree of “uniqueness” is through devising customized events, tailored to the needs of the individual that can attend them through their personal devices. This is the path undertaken by the AMAT project NOW / EVERYWHERE teatro, musica e danza possibili (adesso), an attempt to react to the crisis of the performing arts sector by designing a series of events to be delivered only and exclusively through the digital medium. The aim of the project is to find alternative routes to make the theatre experience possible under the smothering restrictions imposed throughout the lockdown. The performances comprised in the NOW / EVERYWHERE programme entail a private interaction between the performer and the spectator; in Call my name by Fabrizio Favale and Le Supplici, a series of dancers perform in front of a cell phone camera for one spectator only. This spectator can choose the day and time of the performance, no longer compelled to abide by the tacit rules of community life. 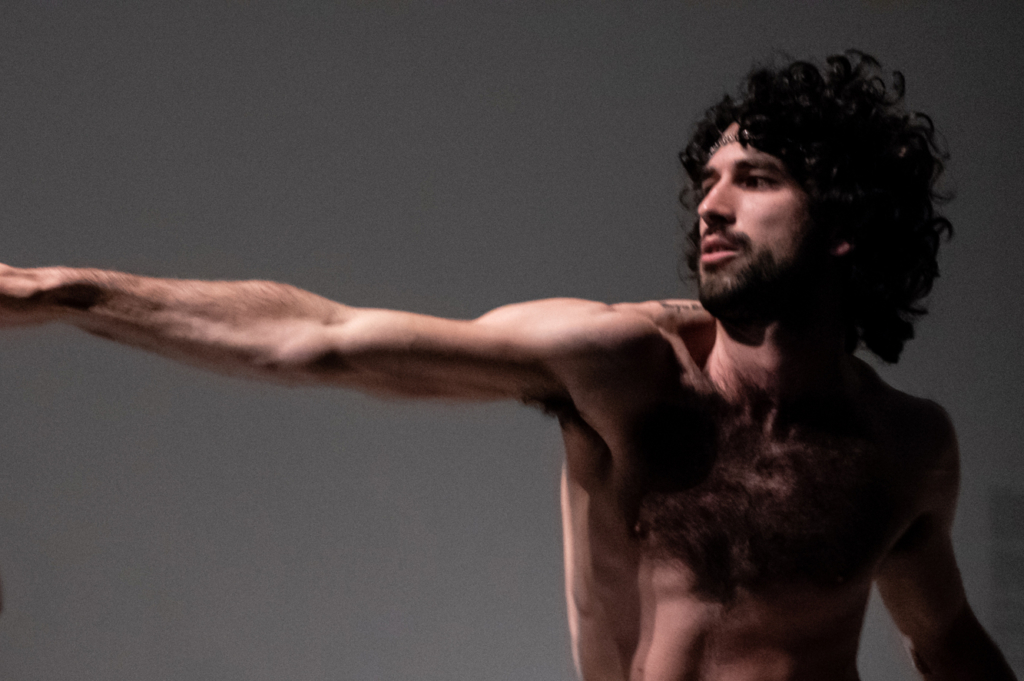 Theatre on a line, by Cuocolo and Bosetti, consists of a private phone call with a single spectator, it’s all about the emotional connection of two strangers over a phone call, all about intimacy and introspection. 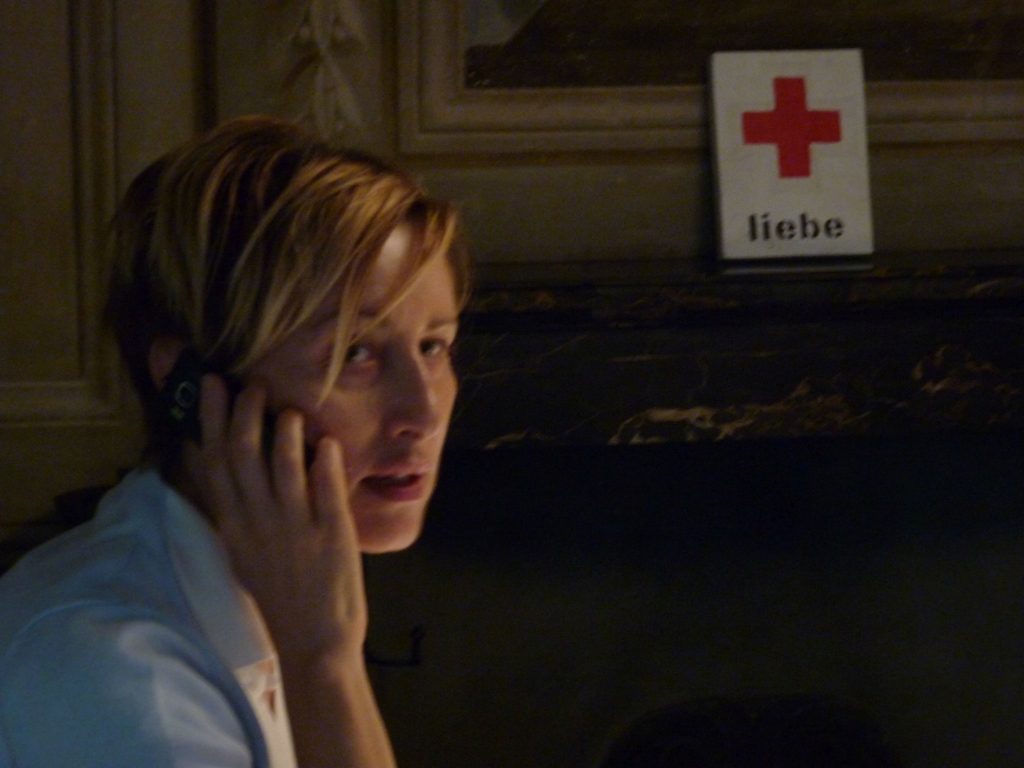 Theatre on a line, Roberta Bosetti – courtesy of AMAT

The NOW / EVERYWHERE programme has no doubt the merit of acknowledging the economic value of digital productions by reintroducing the ticketing service and thus drawing these productions out of a too often taken-for-granted gratuity.

It reminds us that the responsibility of the performing arts sector is that of trying to imagine and design new scenarios where the notions of community, sharing and accessibility are rethought in compliance with the nature of the new technologies. It reminds us that culture should not try to survive despite the technological mediation but needs to transform itself in order to exploit the potentialities of this new mediation.

But it also reminds us that live performances are intrinsically connected to the variables of a specific time and space frame, and that frame is the necessary prerequisite for performing arts to have a real impact on the interpersonal, economic and cultural conditions that define our micro-realities.

[2] Opera Hip(ster) was originally developed in 2015 by S.IN.C. Spettacolo Innovazione Creatività,  the project that has been the forerunner for B.ART

facebooktwitterlinkedin
We use cookies to ensure that we give you the best experience on our website. If you continue to use this site we will assume that you are happy with it. Privacy Preferences Ok
When you visit this website, information may be stored on your browser mainly in the form of cookies. You can choose not to allow certain types of services. However, not allowing certain services can affect your experience and the service we keep offering.